Mixed A team travelled to Driffield Rec to take on their A team – a clash of titans, from which Pock emerged winners 6-3.  Hobson and Hill took all before them, conceding only 4 games in 3 sets;  Trevor Loten/Mel Duncan lost just one set, and that on a tie break;  and Zak Los/Ruth Hill took one set.

Mixed B were at home to Beverley B, and won a closely fought match, as indicated by 3 tie-breaks.  Dave Gamble/Alice Mowforth were, sadly, on the wrong side of two of the tie-breaks, but won their other set;  Adam Smith/Mel Watson seized the day on another tie-break and won another set comfortably;  and Stuart Barnett/Emma Owen swept all before them taking all three sets:  a good 6-3 win for Pock.

Mixed C travelled to Long Riston, for a comprehensive 7-2 win – well worth the trip. Ross Gleig/Fiona Lambert won all 3 sets, and Hart/Nuttman and Holding/French taking 2 apiece.

Mixed D were at home to Beverley Town, but battled in vain, losing 2-7 to the canny Beverley players.  Matt Jones made an impact with partner Louise Durkin to take Pock’s two sets:  Di Flint/Bill Browne and Jean Hunter/Stuart Berry were less forceful, and came away empty-handed.

Mixed E made the trip to Brandesburton, but came away empty-handed.  The 0-9 loss did not represent the closeness of the contest, however, with James Eaglesfield/Angi Collins losing 2 tie-breaks by a whisker and several pairs scoring respectable games scores. 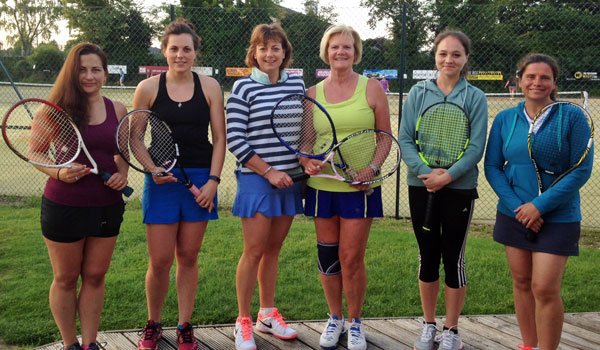 Pocklington Ladies march on with impressive performances across the board.  Pock Ladies B promoted to Division 1, played Ladies A, and although it was a comprehensive win for the A ladies, a spirited performance by Ladies B made for an entertaining, glorious summer evening’s tennis.

The Fulford Saturday League continues apace, and Pock Ladies B had another close shave playing David Lloyd B:  taking the match 55 games to 53!  It was a terrific morning’s tennis, closely fought, with the outcome not entirely clear until the final ball was hit.  Jean Hunter/Josephine Nuttman and Andrea Bland/Louise Wilkinson won 20 games apiece, and Louise Durkin/Looby Kettlewell secured 15…to take the match.  Couldn’t have been closer.

The Pock men are also doing well, with a first win of the season for the Men’s C team against Long Riston C, with a Captain’s performance by James Eaglesfield, playing with Robert Sampson.

With nice light evenings, and Wimbledon on the horizon, social tennis is the name of the game this summer – with social tennis several evenings a week, and lots of coaching options, it’s still a great time to join the club for a summer of tennis action.